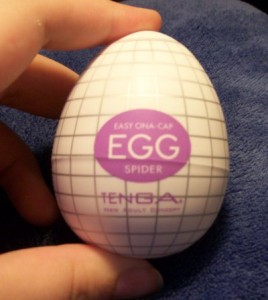 The front side of the egg. The decoration on the packaging matches what the inner texture looks like.

The eggs all come in a small, plastic egg-shaped container that keeps the TPR silicone egg safe during shipping and packaging. The outside of the plastic egg will have a plastic lining around it that will show what textured egg is contained within. The packaging is all written in an Eastern Language (Japanese, I’m guessing, but not sure), so you can’t actually read the instructions.

The egg was opened, used to completion, and thrown away within just one use. We used the lubricant that came with the egg without any extra added lubricant. The boyfriend has an average-length penis but is a little bit above average on girth.

Basically, some people may wonder exactly how a penis is going to fit into this egg. When the boyfriend saw it, he thought it was a masturbator just for the head of the penis, and he honestly wasn’t very excited to use it. In my mind, I imagined something of the same. I thought it was made a jelly material that wouldn’t stretch much and was just intended for use over the head of the penis. However, that’s not how it works.

The TPR silicone material has quite a bit of stretch to it. It basically stretches over the head of the penis and looks like a hat. (A little silly hat.) But that’s unstretched. When stretched out, it will easily reach the bottom of the shaft of the penis. The material of the bottom of the egg stays relatively bunched out but the material near the top of the egg stretches out really thin. Like, really thin. This is the reason that many reviewers say that this egg isn’t going to last very long – that material acts like it will break relatively easily. 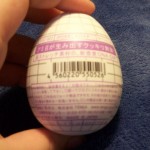 The backside. All in a foreign language. :(

The lubricant that comes with the egg does work amazingly to lubricate the egg. The boyfriend put it into the egg, so I didn’t get a chance to read the packaging, but I’d imagine it was water-based lubricant. The lube lubricated the egg well, and the entire twenty minute session didn’t require any addition lubricant. The lube that comes with it really should work for pretty much anyone.

We chose to use the egg as a one-time use. We had planned to use it that way before we actually used it, but after the one use we did use it for, afterwards, we found that it had a hole developing in the top of the egg. A rip of the material. I honestly think it probably would have split with a second use of the egg. So we just trashed the thing. He was pretty rough on the egg, so that might have something to do with it, but what’s the fun in using it if you have to be gentle with the Tenga Egg? Not much of a point. So I’d say to consider this a “one-time-use” purchase, but if you take care of the egg, it’s possible to keep it for multiple uses.

Cleaning wouldn’t be too difficult if you wanted to keep it. The egg can reverse inside out easily. You just would want to rinse the egg out with warm water. You’d have to find a water-based lubricant to use with the egg as well as the included lubricant packet was meant to be one-use. You could store the sleeve back in the egg casing if you wanted to.

I am totally satified with the product and how quickly i got it. I will shop here again

Thicker lube that doesn’t last as long as I would like, but it’s still my go to lube for what I got going on.

I am totally satified with the product and how quickly i got it. I will shop here again

Thicker lube that doesn’t last as long as I would like, but it’s still my go to lube for what I got going on.